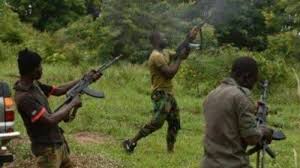 Gunmen in a fresh attack have shot dead four residents of Tafila village, near Gwada town in Shiroro Council Area of Niger State.

Also, unspecified number of people were reportedly kidnapped by the armed men, who were said to have attacked the village on Saturday night

Those killed during the attack on the village, which is about few kilometers to the Shiroro Electricity Dam and also about twenty five kilometers from Minna, the state capital, were two women and two kids.

According to a resident, who pleaded annoymity, one of the kids whose mother was also killed was shot in the head.

The residents further disclosed that the bandits on several motorcycles were armed stormed with AK-47 rifles and other dangerous weapons.

He said they suddenly entered the village and targeted a truck conveying villagers from Erena town to Gwada where hundreds of IDPs are presently staying .

He said they fired bullets at them at close range, adding that apart from those who killed, several others in the truck were critically injured.

He said: “Many of the villagers ran for safety into the bush and many others were unlucky as they ran into the waiting hands of the bandits and were abducted and led into the bush. Also, many cattles were rustled by the bandits.

A senior official of the Niger State Emergency Management Agency confirmed the incident but preferred not to be named.

He said: ”We heard something about the latest banditry in Gwada area but we are yet to get full details.”

Meanwhile, the Niger State Police Command, in statement, said it was aware of the incident,

However, the state command through its spokesperson, Wasiu Abiodun, was silent on the number of casualties.

The statement read in part: “On 16/04/2022 at about 1900hrs, information was received that armed bandits attacked Kaduna village via Gwada, Shiroro LGA.

“Police tactical team and other security agencies with vigilante were mobilized to the area and the hoodlums were repelled.

“Details of the incident are still sketchy while reinforcement has been dispatched to Gwada and normalcy has been restored.”