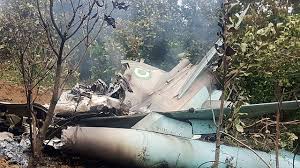 A Nigerian Air Force (NAF) plane flying from Kaduna to Abuja has crashed, killing two pilots on board.

The details of the crash is sketchy and could not be immediately confirmed if the plane was attacked by the bandits.

Also, it could not be established if the crash was linked to a mechanical fault.

A military source disclosed that the crash occured on Tuesday night.

The source, who preferred not to be named because he was not authorized to speak on the incident, said: “An Air Force plane has crashed, two pilots feared dead. The plane was flying from Kaduna to Abuja.”

It would be recalled that similar crash occured on July 18 2021 involving a NAF fighter plane went down while on a mission in the North-West.

The NAF initially denied that the plane was crashed by the terrorists in the bush, between the boundaries of Zamfara and Kaduna States but confirmed the mishap the following day.

However, the pilot of the Alpha jet, Flight Lieutenant Abayomi Dairo, ejected himself before the crash and survived.