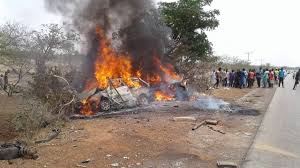 No fewer than twenty passengers on Tuesday were burnt to death in a ghastly motor accident on Bauchi-Kano road.

The Sector Commander of the Federal Road Safety Corps (FRSC) in Bauchi State, Yusuf Abdullahi, confirmed the accident to newsmen.

He said the accident, involving a commercial Golf 3 car and a Sharon Volkswagen car, was caused by dangerous driving and speed violation.

According to the FRSC boss, the accident happened around 11.am at Huturu Village on the Bauchi-Kano road in Ganjuwa Local Government Area of the state.

He said: “Twenty one people were involved in the crash and there were 12 male, five female, one male child and three female children.

He explained that bodies of those who died in the crash would be given a mass burial in the Huturu village, adding that the injured had been taken to Kafin Madaki General Hospital in Ganjuwa Local Government Area of the state for treatment.