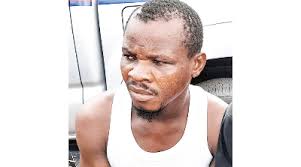 Men of the Lagos State Police Command have arrested a mechanical technician, Ifeanyi Odii (32), for allegedly killing a 67-year old man, Okoh Awoh, for allegedly urinating in front of his workshop.

The suspect reportedly hit the deceased on his leg with a wheel spanner at his workshop located in Ikota, Ajah Area of Lagos State.

The suspect, who escaped being lynched by irate mob, said he had warned the deceased several times to desist from urinating infront his workshop.

Odii said: “Awoh never desist from the act, the fateful day he died, I was having issues with one of my boys when he came again to urinate at the same spot. Immediately I saw him, I approached him that I have warned him not to urinate at that spot again but he never listened.

“It was in the process of fighting that I hit him with a wheel spanner on his leg but didn’t die the same day. It was a week after he died and police came to pick me up and tell me that I am the one that killed him. That was how I found myself here. I regret my actions.”

It was also gathered that it took the intervention of policemen and some good samaritan in the area to save the suspect from being lynched by angry traders in the area following the demise of Awoh. The story was confirmed by

The Lagos State Police Command through its Public Relations Officer (PPRO), Benjamin Hundeyin, said the suspect was rescued form neiy killed by prompt intervention of the police and good Samaritans.