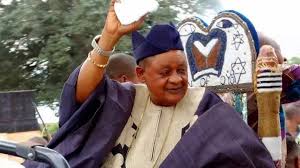 A leading Yoruba traditional ruler, the Alaafin of Oyo, Oba Lamidi Olayiwola Adeyemi, III, has joined his ancestors at the age of 83 years old.

It was learnt that the Alaafin’s remains had been taken back to Oyo in the early hours of Saturday.

The monarch’s first son, Tunde, and other children reportedly received his remains at Idi-Igba, according to a palace source.

Meanwhile, traditional rites for the first class monarch, who came on the throne on January, 1971.