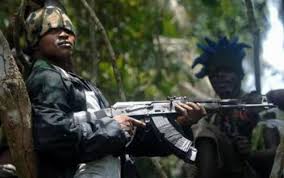 Also, abducted with him was his brother-in-law, Mr. Eric Etunim, who had gone to pick him up from a train station at Owa-Oyibu in Ika East Council Area.

The kidnappers were said to call the family have demand N13 million ransom for the victims ‘ release.

One of the family members of the victim, who would not want his name in print, told journalists that: “Mr. Chukwuyem Afam, a son to late Sunday Afam whose burial was slated for Saturday at Ekuku-Agbor, and one of their in-laws, Mr. Eric Etunim, who was called up to go pick up Mr Chukwuyem Afam from the train station at Owa Oyibu have been abducted.

“They were driving to Ekuku-Agbor when they were accosted by the suspected kidnappers who shot sporadically into the air, before whisking them away.

“Mr Chukwuyem Afam travelled down from Abuja on Friday for the burial of his father and called on one of their in-laws, Mr. Etunim to pick him up but unfortunately they were kidnapped.

“They have contacted the family with an initial demand of N13 million ransom, which they later brought down to N5 million per person based on their last call.”

Meanwhile, the Delta State Police Command through its spokesman, Bright Edafe confirmed the incident to journalists.

According to Edafe, the police have launched a manhunt for the suspects, expressing hope that the victims would be rescued unhurt and the bandits would be apprehended to face the law.