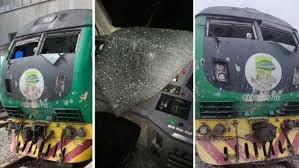 A Kaduna bound train on Monday night was attacked by faceless bandits and some of passengers travelling from Abuja were feared killed.

Many of the almost nine hundred passengers on board were also reportedly injured and kidnapped during the attack by the armed men.

The train was reportedly attacked between Katari and Rijana, not far from Rigasa Train Station in Igabi Local Government Area of the state.

It was gathered that the bandits used an Improvised Explosive Device (IED) to bomb the rail track before derailing the train.

It was also gathered that as soon as the train was derailed the bandits began shooting sporadically to scare and capture the victims.

A passenger, who escaped from the scene, Anas Danmusa, has narrated the incident, saying there was no rescue mission for about one hour.

He said the bandits tried to forcefully gain entry into the train to abduct the victims.

Meanwhile, troops deployed to the area were said to have eventually come to rescue the victims.