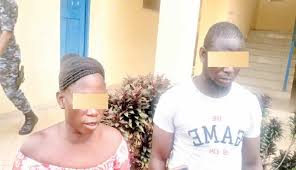 The Osun State Police Command has arrested and paraded a woman, Ganiyat Abass and her husband, Olatunbosun Ajibola, for allegely stealing a 6-day old baby.

However, the suspects denied stealing the baby.

Answering questions from reporters during their parade at the Command ‘s headquarters in Osogbo at the weekend, Ganiyat said she was a Jemilat’s friend and was always assisting her, clothing and feeding her.

On the fateful day, she said she wanted to see her husband who had moved to his new house and was carrying the infant in her hands when she an alarm was raised that she wanted to steal the baby.

Also, Olatunbosun, Ganiyat’s husband, who also denied knowledge of attempt to steal the baby, said: “All I knew was that Ganiyat told me she was pregnant and always demanded money for a scan from me and which I always gave her.”

He insisted that he was not aware of any plan by his wife to steal the baby.

Jemilat’s mother, who also denied knowing the suspects, said they did not know her and all they wanted to do was to steal the newborn baby.

Addressing newsmen earlier, the Osun State Commissioner of Police, Olawale Olokode, said the Iwo Division of the Nigeria Police arrested Ganiyat and her husband after an alarm was raised of a missing child, adding that the child was found stuffed in a shopping bag.

Olokode said: ”Ganiyat Abass and Olatunbosun Ajibola, were arrested on the 24th March, 2022 at about 2030hrs. The complainant reported at Iwo Division that, the above-named suspects connived and stole a six-day-old baby girl from the lactating mother who is mentally challenged, by name Jemilat Musa ‘f’ 23yrs, residing at Agbele’s compound Iwo.

“The first suspect went to the apartment of the mother pretending to be her sister-in-law, trickly gave her some wraps of cornmeal and sum of N200 to go and buy bean cake (Moi-Moi). Shortly after the baby’s mother left to buy the bean cake, the suspect quickly put the baby inside a sack and ran away. Suspects were arrested at the early hours of today 25th March 2022 in collaboration with the civilian JTF.

“During interrogation, they confessed to the crime. Suspects will be charged to court after the completion of investigations.”