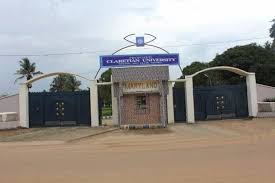 A student of the Claratian University of Nigeria, Nekede in Owerri, Imo State, Suel Ambrose, on Saturday slumped and died on stage, where he was acting an Easter drama on Good Friday.

There was a pandemonium following the incident and effort to keep him alive failed.

Ambrose was said to be acting the character of the biblical Peter during the activities marking crucifixion of Jesus Christ when the incident happened.

A student identified as Mavis said the 25-year old first year student of Philosophy died and an indigene of Benue State, reportedly died before getting to the hospital.

According to him: “He was playing the role of the biblical Peter in the dream to demonstrate how Peter cut the ear of one of the Roman soldiers who came to arrest Christ and Jesus fixed the ear and as the drama was going on he slumped and died.

“So the young man fell on the floor and started bleeding. We took him to our school hospital and the doctors did their best to revive him but he was not responding.

“We took him to the Federal Medical Centre in Owerri and that was where he was certified dead.

“The drama was in commemoration of the death and resurrection of Jesus Christ in respect to the Easter celebration. He was born in 1997. He is a year one student and had the dream of becoming a priest in the Catholic church.”