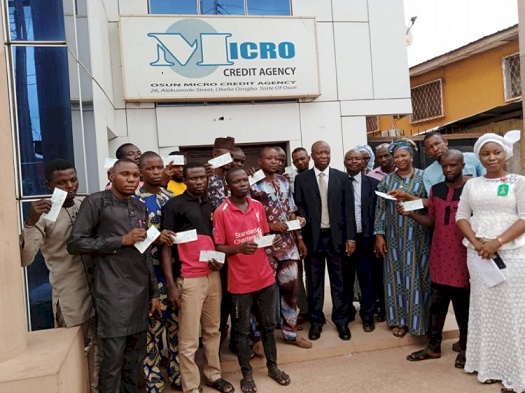 The Osun State Government on Monday kicked off its farming empowerment programme with the distribution of N2.2 million naira for 14 tomatoes and pepper growers.

At the presentation of the cheque to the beneficiaries, the Manager of the Osun Micro Credit Agency through which the programme is being implemented, Prince Dayo Babaranti, who represented Governor Gboyega Oyetola, said the empowerment programme will increase production and create employment opportunities for unemployed teeming youths in the state.

He also said the empowerment will help the youths to be self reliant.

He assured that the Gboyega Oyetola administration would leave no stone unturned to reduce the problem of unemployment to the bearest minimum in the state.

According to him, Oyetola is passionate about the development of the state in all ramifications.
Explaining that the empowerment programme is in three phaces, he said apart from the tomatoes growers, another millions of naira has also been set aside to support cassava and jothropha growers.
Babaranti, who disclosed that about 26, 000 people have benefited so far in the loan by the agency since its establishment in June 2, 2014, said that Governor Oyetola in his bid to empower teeming youths and ensure that state is economically bouyant to cater for its citizens has approved the loan to support farmers across the state.

He further disclosed that the first set of the beneficiaries were selected from the four local government areas, after their farms have been inspected and the government was convinced about their impressive performance to the tomato faming
He listed Boluwaduro, Boripe, Obokun and Ifelodun among the council areas from where the beneficiaries have been drawn.

Babaranti, who explained that the loan given to the tomato growers is a test case, urged the beneficiaries not to disappoint the governmet by making judicious use of the money and ensure prompt refund on or before the stipulated time.
Commending the government, o

One of the beneficiaries, Lawal Sikiru Omotunde, who commended the state government for the gesture, said they would forever be grateful to Governor Oyetola, whom he described as a man of the people.

Omotunde, who is the Chairman, Osun State chapter of Tomatoe and Pepper Growers Association of Nigeria, said majority of them could not accomplish their aims because of lack of fund, adding that with “this loan it would now be easier for us to earn more in our business.”

He maintained that Oyetola’s effort in boosting the state economy through agriculture would yield dividends in no small measure, saying the state government had saved them from accessing loans at cut throat interest from money lenders.
Also, another beneficiary, Okunola Akeem, said they were very happy with the philanthropic gesture of the governor.

He said there is no doubt that Governor Oyetola meant well for the youths of the state, adding that with “this financial assistance, the state would soon become a hub of agriculture in the South West.”
He vowed that the members of tomato and peppers association would start mobilising for Governor Oyetola for his second term in office so as to be able to take the state to the greater heights.

With rising prices of foodstuffs, now is time to return to farming, says Mrs. Oyetola