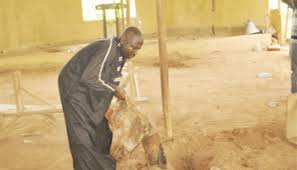 A pastor, Nelson Foni (55), has been docked for allegedly defrauding a member of his church, Edith Emmanuel, of N1.7 million.

The defendant, a General Overseer of Gathsamen Prayer Ministry, Kafanchan, was dragged before a Magistrates’ Court in Kafanchan, Kaduna State for allegedly giving a false prophesy the victim.

The defendant was arraigned on a three-count charge of extortion, criminal breach of trust and cheating.

According to the prosecutor, the offence is punishable by the Kaduna State Penal Code Law, 2017.

The state counsel, Alheri Daudu, told the court that Edith and her daughter attended a Foni’s church programme sometime in 2016 and were given a false prophesy.

He said: “Foni singled out the woman and her daughter and declared that God revealed to him that her daughter would study abroad and not in Nigeria.

“He consequently asked the woman to invite her husband to the ministry, where he repeated the fake prophesy.

“The couple told Foni that they lacked the resources to fund overseas study and he advised that they should raise N1.7 million, which he would invest in crypto currency on their behalf, and they obliged.

“The cleric also told the couple that the return on investment in the crypto currency would be more than enough to cover for the daughter’s school fees and flight ticket.

“Each time the couple went to Foni to inquire about the return on investment, however, the cleric would browse on his laptop and declare that the investment had not matured.

“Consequently, the matter was reported at the Nigeria Security and Civil Defence Corps, Kafanchan and Foni was arrested.”

When the charges were read to Foni, he pleaded not guilty.

The defence counsel, Amba Adze, applied for bail, to which the state counsel objected on the ground that if granted, Foni might defraud more unsuspecting individuals.

In his ruling, the presiding Magistrate Michael Bawa, granted the defendant bail in the sum of N1 million and a surety in like sum.

The magistrate ruled that the surety must be a village head with at least N1 million deposit in his bank account and must produce the bank statement.

In the alternative, Foni would be remanded at the Kafanchan Correctional Centre pending the next hearing on April 11.