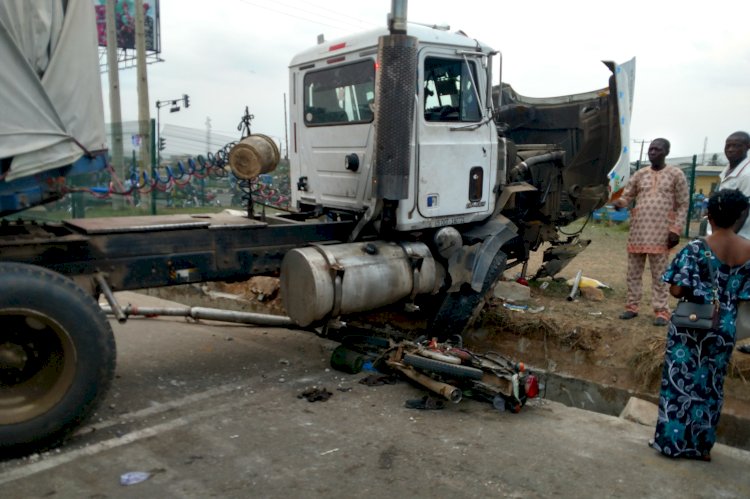 A 25-year old tiler, simply identified as Jamiu, was killed on his private motocyle on Sunday evening by a driver of trailer at Olaiya junction in Osogbo, the Osun State capital.

An eye witness account revealed that the driver of a trailer with registation number Lagos: LSR140 XV, coming from Gbongan road refused to stop for trafick light that had stopped him and swerved to crush the motocyclist to death.
It was gathered that another driver of a wine colour Toyota Camry car, marked Lagos APP 821 CX on a right of way, coming from Odi-Olowo road was also bashed by the trailer but was lucky not to have been killed.
But Jamiu was on his motocycle marked Osun: SGB 014 UH, waiting for his turn to be released by the trafick light, when the trailer crushed to death.

It was also gathered that two ladies on the motocyle with the deceased jumped off when they saw the trailer facing their direction.

Security men, including the men of the Department of State Services, the police, the Federal Road Safety Commission had an hectic time preventing irate mob from setting the trailer ablaze.

The deceased, who was described as very hardworking, was said to operate a boutique apart from being a tiler.

The deceased is said to have a wife and a year-old child.

His body has been taken to the morgue of the State Hospital at Asubiaro, Osogbo.