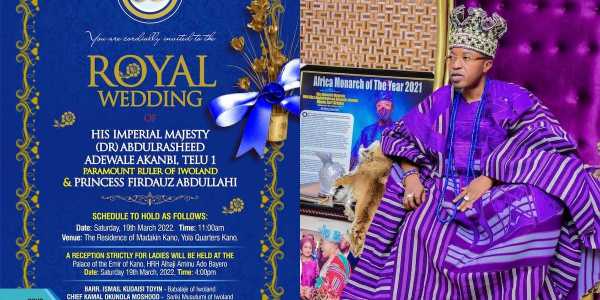 The Oluwo of Iwo, Oba Abdulrosheed Akanbi, is set to take a new wife in Kano State on Saturday, March 19, 2022.

The invitation to the ceremony obtained on Wednesday indicated that Oba Akanbi would wed Princess Firdauz Abdullahi at the residence of the Madakin Kano, Yola Quarters, Kano.

After the wedding, a reception strictly for ladies will hold at the palace of the Emir of Kano, Alhaji Aminu Bayero.

He, however, said because of his position as a paramount ruler, the Oluwo might not be in Kano for the wedding.

“Baba is not likely to be there (in Kano) as a paramount ruler. They will bring the wife to him in Iwo. There is no cause for alarm,” Ibrahim stated.

The Oluwo’s last marriage to a Jamaican, Chanel Chin, which produced a son, crashed in December 2019, and since then, the monarch has not been openly associated with any woman.