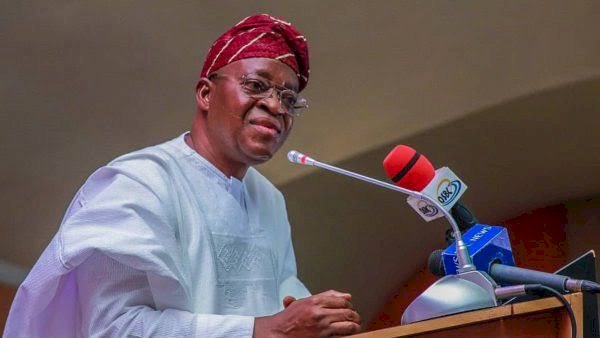 By Isaac Olusesi
The capacity to optimize the acceptable purposes of local governments, especially positive obligations to stimulate democracy, participation by grassroots in the management of their own affairs and general development, and mandatory pursuit of progressive ideals, fairness, equity, transparency and accountability to further stability and strength in State of Osun is a crucial element in the Governor Gboyega Oyetola’s charge, last Monday, to the newly appointed local government caretaker chairmen in the state.

The event was the inauguration of the new council grandees, with the state helmsman’s directive to them, to provide effective cooperation in the execution of government policies, programme and services in their respective council areas, The directive is in order and should be taken hook, line and sinker, otherwise, the whole stuff will be an exercise in hasty futility, that cannot be tolerated or allowed to happen in the All Progressives Congress (APC) government of Osun.

It is rather strongly expected that the new council chairmen should ensure the state government’s effective presence in the locality, the drawing board for the anticipated pace and quality of developments in the council areas under their watch. The APC-Oyetola prospects to see development-focussed councils under new navigators, matching developments at the council level with the people centred state Development Agenda as Oyetola aptly puts it: “……ours is an administration driven by the philosophy that governance is only meaningful to the extent that it serves the needs of our people….”

Empirically, the local councils across the state under the Oyetola inspirational leadership had hitherto been inoculated against such abuses as profligacy, corruption, other behaviors, antithetical to excellence in public administration; and the councils, also got overhauled and vulcanized to their scope of authority, responsibility and functions, monitoring and measurement as well as appropriate sanctions for laxity, with the state government effectiveness in the council areas, established; efficient performance, ethics and values of public service as par integrity and team spirit heightened;and the all-inclusiveness positive impact on the governed, generated at every instance.

The result under Oyetola as at press time, is the local councils’ appropriation of desirable leadership, dedication at duty desk, and effectiveness, efficiency in service delivery to the state citizenry. Accordingly, he succinctly asked that the newly inaugurated council chiefs “should hit the ground running and ensure that you deliver urgently the dividends of democracy to our teeming citizens.”

Meaning that change, resulting in transformation of the facets of the council areas to progress must be sustained and quality of life and living through economic and non-economic fundamentals must be enhanced.
In that direction, Oyetola is prompted by a number of factors, including exigencies of his desire to develop backward areas of Osun, and solve or ameliorate some pressing rural or semi-urban problems, not waiting until undesirable trends emerge. Hear him: “To do this, it requires that you lead a united fronts, working closely with bureaucracy to run an administration that listens to the deepest yearnings of the people and actively seek constructive feedback that will aid the processes of governance.”

In this way, council governments will get devolved to include more people in the council areas in the development policy making processes at least, by all means to solve the issue of “minorities” in the state. The _raison de’etre_ , superior argument here is, the council governments promote more balance growth in the bare rural areas, paying attention to the socialization of the peasants and rural masses.

Part of the superior argument is that the inauguration penultimate Monday will diffuse political power, the council area basis, without creating anarchy, to enhance governance of the state and foster effective mobilization of the masses of the people of the state for lead participation in the socio economic and political developments of the council areas.
While the rural communities get permitted to determine their own political affairs and also in process or as corollary, get injected with the noble ideals of protection of “minority” rights, considered germane to further the evolution of liberal democracy in Osun under the APC-Oyetola administration, with new council chairmen, the councils, become training grounds for several politicians who may want to aspire to leadership and partnership positions at the state level.
And even at the federal level.

Olusesi, an Assistant Director, Directorate of Publicity Research & Strategy, the All Progressives Congress, State of Osun chapter, writes the piece.

Vaccination against COVID-19 starts in Nigeria…Family physician, Cyprian Ngon, first to get it