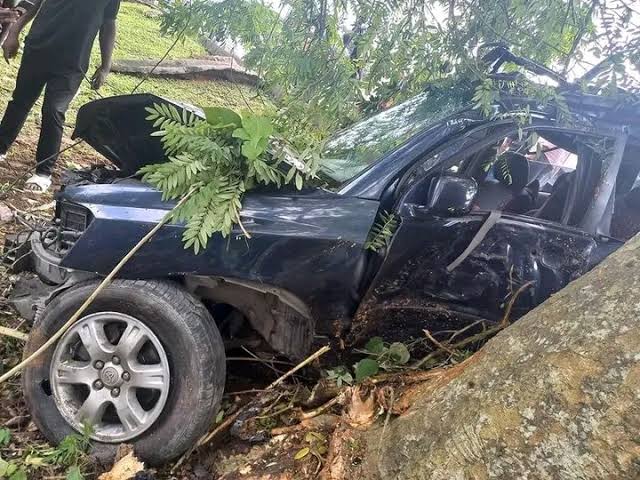 A middle aged house wife on Sunday died in a motor accident in Calabar, Cross River as she was pursuing her husband and his female lover.

The deceased woman was said to have sighted her husband and his mistress at the Murtala Muhammed Way before she gave them a hot chase that led the crash.

According to an informed source, the husband and his lover just left SPAR Shopping Mall when the deceased woman sighted them.

The woman was said to have tried to block her husband’s car with her Toyota Highlander SUV but missed the chance to do so.

Pleading anonymity, he said: “Her husband maneuvered his vehicle out of the attempted blockade then took the Murtala Muhammed Way. Missing the chance to block him, the wife gave him a hot chase with her car.

“In a bid to outrun her husband, she lost control of the speeding vehicle, veered off the road and slammed the vehicle, head long, into a tree, damaging the vehicle beyond repairs and also killing herself.”

Meanwhile, the Sector Commander of the Federal Road Safety Corps (FRSC) in Cross River, Maikano Hassan, who confirmed the incident, said the woman died after crashing her Toyota Highlander SUV in alone accident.

According to the FRSC boss, the accident was as a result of over speeding.

He said: “The accident involved a Toyota Highlander SUV and it happened on the Muritala Mohammed Way in Calabar. It was a lone accident, claiming the life of female driver who veered off the road into a ditch.

“Though the woman was immediately rushed to a nearby hospital, but she was said to have died few minutes later due to the injury sustained from the incident.”

Osun hunters apprehend herbalist with human head, intestines, hands him over to police