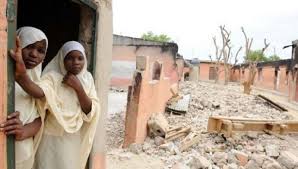 Terrorists suspected to be members of the Islamic State for West African Province (ISWAP) have reportedly abducted three girls after a fresh attack on Yimirmigza village in Chibok Local Government Area of Borno State.

The terrorists on Tuesday night were said to have attacked unannounced while the residents were about going to bed.

Meanwhile, the terrorists have reached out to one of victim’s family for ransom.

It was gathered that conversation between some bandits and a member of the victim’s family revealed that many ISWAP fighters are among the bandits.

In the conversation, the victim’s family was asking a bandit on to help release the girls, but the the bandit said he had no power to do so unless their leaders gave the order.

Also, one of the victims speaking in Chibok language, was heared saying: “These people are too many. For now, we are only three girls in their custody.”