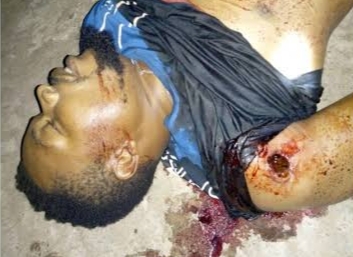 A trader, Mr. Nnaemeka Chukwu, has been shot dead in the presence of his bride-to-be by bad boys of a notorious street gang in Abakaliki, Ebonyi State capitol ten days to his wedding.

He was said to be with his finance, Favour Chioma, on Monday evening when some armed gang reportedly attacked him in his shop inside the International Market, Abakaliki, where he sells groceries.

After killing the man, the gunmen stole cash sales for the day, his spouse’s phone and ran away.

Confirming the incident to newsmen, spokesperson for Ebonyi State Police Command, Loveth Odah, said: “We have heard about it, but the command is yet to get the full details of the killing to enable it to make any arrest.

Also, narrating the incident, Chioma, the victim ‘s spouse, said it happened on Monday night after the close of business at Chukwu’s shop at the International Market, Abakaliki.

She said: “Some boys accosted us; first, they shot into the air, then they ordered my husband to lie down and they shot him; collected my phone and left.

It was learnt that the traditional wedding for the couple was to take place on April 21 at Amaiyima Ekpelu, in Ikwo Local Government Area while the church wedding was slated for April 23 also at Abakaliki.