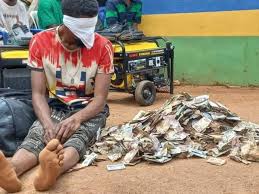 Olufemi was among other nineteen suspects arrested by the police for various criminal offences, including fake kidnapping, stealing, burglary, cattle rustling and armed robbery in Ekiti State.

The police spokesman in Ekiti State, Sunday Abutu, said Olufemi, who on Tuesday addressed newsmen before parading the suspects, disclosed that Olufemi was arrested by the police after breaking into the Christ Apostopilc Church’s Camp ground in Ikeji Arakeji, Osun State.

He said: “On the 16th September, 2022 at about 04:30am, the state command’s operatives, while on stop and search along Igbara-Odo-Akure Road, intercepted one Akindele Olufemi, and was found with a school bag loaded with different denominations of naira notes.

“During interrogation, the suspect confessed that he travelled all the way from Iropara-Ekiti to Christ Apostolic Church Camp ground, Ikeji, Arakeji, Osun State to steal the cash sum of N620,115 from the church’s offering vault.

“The suspect further revealed that he was employed as a security guard of the Church sometime ago before he voluntarily resigned.”

According to the police spokesman, the suspects were apprehended after one Omoniyi Taiwo of Kajola street, Ikere-Ekiti reported to the police on 3rd September, 2022, around 4.00pm about alleged kidnap of Ameh Sunday, who was working in his site at Ikere-Ekiti.

He added that the suspects were demanding N5 million ransom from him before Ameh would be released.

He said:“Upon the receipt of the information, a team of the RRS operatives swung into action and arrested the purported victim in his hideout at Ikere-Ekiti on 16th September, 2022.”