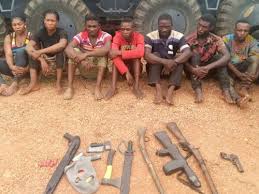 Eighteen members of Aiye Secret Confraternity have been arrested and paraded by police in Ekiti State , who allegedly killed two persons in Oye-Ekiti.

The commissioner, who was represented by the Command’s Police Public Relations Officer, Sunday Abutu, disclosed that the suspects confessed that they participated in the killing of the two persons, Ajayi Sunday and Owolabi Moses, in March.

The police boss said: “On 28th May, 2022 at about 8:00am, a team of the Rapid Response Squad operatives, acting on a tip-off, swooped on a criminal hideout in Ikole-Ekiti where suspected cult members were holding their initiation.

“Items recovered from the suspects are one cut to size single barrel gun, two cutlasses and 10 suspected stolen motorcycles which they used in carrying out their nefarious activities.”

Also, the police operatives have paraded two suspected cult members, who attacked two students of the Ekiti State University, Ado-Ekiti, in their residential apartment in Iworoko-Ekiti on May 15.

The police spokesperson said the two suspects, Akinbo and Shodipe, confessed to be members of the Aiye Confraternity.

He said a camouflage cap with Pirate secret cult insignia was recovered from them.