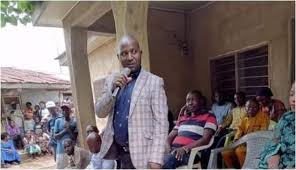 Two persons were feared killed on Tuesday night as a federal lawmaker, Hon. Musa Agah, his wife and two kids escaped death narrowly when gunmen ambushed them on a Plateau road.

Those killed were said to be supporters of the lawmaker.

The convoy of the member of House of Representatives, representing Jos North-Bassa Federal Constituency was said to have run into the gunmen while returning home from a thank-you tour around 9.00pm along Twin Hill Miango road in Bassa Local Government area.

The federal lawmaker and his aides were said to be returning home from a thank-you tour around 9pm when the incident occurred along Twin Hill Miango in Bassa Local Government area of Plateau State.

A personal assistant to the lawmaker, Moses Maly, also in the car with the lawmaker said during the attack, said the car of his boss was riddled with bullets.

According to him, two of the lawmaker’s supporters, who were on motorcycles, including the Peoples Democratic Party (PDP) ward party chairman and woman leader who were ahead of the convoy were killed in the ambush.