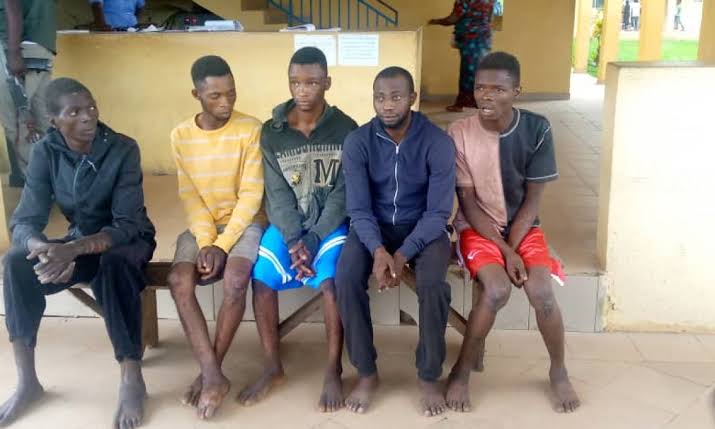 The suspects confessed that they were paid the sum of N500,000 to kill victim to cover N2.1m fraud.

The spokesperson for police in Osun State, Mrs. Yemisi Opalola, who addressed newsmen before the parade of the suspects, said the police detectives acted on intelligence before their arrest.

According to her, on September 3, after a robbery operation at Koteyemu/Aku area of Ikire, police from Ikire Area Command in joint operation with the civilian volunteers moved to the area and arrested the prime suspect, Adamo Aliyu.

She said: “Upon a distress call/intelligence on 3/9/2022, that there was a robbery attack/operation at Koteyemu/Aku area of Ikire, the Police from Ikire Area Command in joint operation with the Civilian Joint Task force (Hunters and Forest Security Service, Osun State) swiftly moved to the area and arrested a suspected notorious Armed Robber one ADAMO ALIYU having robbed his victim.

“The Police not resting on their oars extended its investigation to some areas of Ikire where three cohorts of the principal suspect above (2-4) were picked-up/arrested from their various hideouts within the town.

“Also, when the case was transferred to the Anti-Cultism Unit for discreet investigation, the unit immediately swung into action and arrested the fifth suspect.

“In the course of further investigation, the 1st suspect Adamo Aliyu made a confessional statement that on 28/08/2022 himself, Damilola Kayode, Yusuf Idiris, Odewumi Sodiq (1st to 4th Suspects) respectively conspired among themselves and killed the Mobil filling station manager, one Fatai Atanda Adigun ‘M’, aged 55yrs, along Ikire express road, in Irewole Local Government Area of Osun State and carted away sum of N100,000 (One Hundred Thousand Naira).

“On 2/09/2022 the same hoodlums suspected to be members of unlawful society also conspired among themselves again and robbed one Barr. Oyeyinka Musafau ‘M’ of Oke-Olufi Area, Ikire, Osun State and carted away his One Infinix Mobile Phone valued N110,000 (One Hundred and Ten Thousand Naira) and some valuable items, value yet unknown.

“Also, sometime in the month of August, 2022, the 1st – 4th suspects and others at large robbed a cyclist and killed him in front of Irewole Local Government building along Ife/Ibadan Road, Ikire.

“They further robbed some traders along the university area, Ikire/Iwo Road, Ikire and carted away cash of N600,000 (Six Hundred Thousand Naira). They also robbed another cyclist and killed him while they carted away his motorcycle.

“1st – 4th suspects respectively alleged that the 5th suspect Adeshina Ayomide who was one of the staff of the Mobil Filling Station, was the one who sponsored them with the sum of N500,000 (Five hundred thousand naira) only in order to kill the Mobil Filling Station manager in Ikire, Osun State in order to cover up the fraud /misappropriation of the money amounted to the sum of N2,170,000 (Two million, one hundred and seventh thousand naira) which he was involved sometimes in the year 2018.”

Speaking with newsmen, Adamo (24), who works as a bricklayer in Ikire, said he could not remember the number of people he had killed.

Confessing to killing the petrol station manager, Adamo said he was paid N250,000 by Idris’ father to kill the man.

He said: “I have lost my parents at a young age. I have lost count of the number of people I have killed. We have also snatched several motorcycles around Ikire. We usually sell to other communities. I must have killed more than 10 people.

“I work with Yusuf Idris. His father contracted us to kill the man. I was told a woman gave him the job. We went to the petrol station early in the morning and met the man there. My friend, Idris, hit him with a weapon on the head and he died.

“We stole N100, 000 there and fled. After selling motorcycles that we snatched, I made over N1.5m but I squandered it on food, dresses and Indian hemp.”