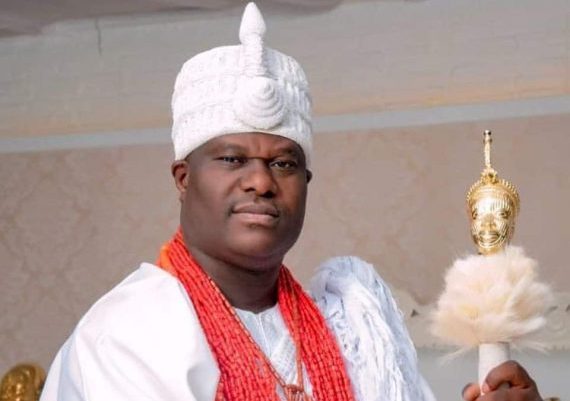 By Charles Akinbode
Festus Olujoba Adebowale Arowoogun last Saturday was installed Sooko of Aka Royal Compound by the Ooni of Ife, Oba Adeyeye Enitan Ogunwusi, in Ile Oduduwa at his palace in Ife.
He was led to the Ooni’s Palace by the head of all the six Obalufon in Ile-Ife, Sooko Adimula Oladele Olasoji Ajilesoro, for the installation proper.

Also, the new Sooko Arowoogun was full of praises for the Ooni for appointment, pledging his loyalty and support for Oba Ogunwusi, in ensuring the ancient town of Ife remain peaceful.

The elder brother of the new Sooko, Dr. Timothy Banjo Arowoogun, a top brass with the First Bank Plc., commended the Ooni for holding and sustaining the tradition of the Ife people and the Yoruba race. He advised the Sookos to work together and be good ambassadors of their respective compounds.

Meanwhile, former President of Ife Development Board and Seriki of Ife, Prof. Muiz Opeloye, has advocated for use of tradition and culture to solve insecurity challenges facing the nation.

He said the spate of insecurity across the country has reached an alarming level and therefore require drastic measures to curb it.

Opeloye, who was also former Commissioner for Local Government and Cheiftaincy Affairs in Osun State, spoke during the installation of Festus Olujoba Adebowale Arowoogun as Sooko of Aka Royal Compound at the palace of the Ooni of Ife, Oba Adeyeye Enitan Ogunwusi, in Ile-Ife.

He said now that insecurity is assuming a very dangerous dimension time has come to recorgnize the role of tradition and culture of the people in fighting banditry, kidnapping, insurgency, cultism and other violent crimes.
According to him, a security structure should be established with the traditional rulers at the top and heads of family compounds and community leaders at the bottom.

Opeloye also advised the government to create opportunities and enabling environment for massive employment to engage an army of jobless youths that are turning into gunmen, kidnappers, miscreants, political thugs, cultists, hoodlums and bandits.

He said: “The security situation is degenerating very fast and this is worrisome. No one is sure of his safety anymore whether on the road or at home. Threats of deaths are all around us and the authorities seem overwhelmed and helpess to find any solution.
“So, there must be an enduring and strong system to regulate social, economic and political affairs in this country. It is regrettable that education sector has decayed and so also all other sectors that are supposed to be drivers of our economy.
“I think the solution lies in recorgnizing out tradition and culture. The heads of the family compound can account for who lives and who is coming to live within the compound and the chiefs and Baales (district heads) could also account for our royal fathers, who in turn can be a veritable source of feed back to all higher authoritie within their domain. So, tell me where will criminal elements hide. And when there are jobs for the youths with enourmous energies wasting away without positive engagement, then crime must definite go down significantly.”