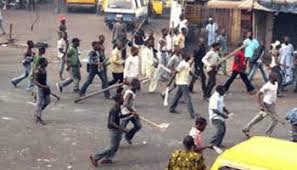 One person has been killed and several other sustained serious injuries in Ede, Osun State after a violent clash between the hoodlums and the Hausa community.

The clash, which happened on Thursday morning was said to have started when a factional group of hoodlums suspected to be land grabbers reportedly attacked Sabo community, where the Hausas reside to extort them.

During the violent clash, a notorious hoodlum, Rasheed Olopa, was said to have been killed.

Meanwhile, the Seriki Hausa, Ede Community, Gambo Ibrahim, who confirmed that thugs clashed with Hausa traders at the sabo community, said: “During the attack, four to five people were injured. we have not ascertained if anyone was killed.

”The thugs numbering five came to Sabo, they were shooting sporadically. Some properties were stolen and many destroyed.”

Also, confirming the incident, spokesperson for the Osun State Police Command, Mrs. Yemisi Opalola, said some hoodlums attacked residents of Sabo in Ede and seized their motorcycles, saying: “The people in the community resisted them leading to pandemonium in the area and in the process one person was killed.”