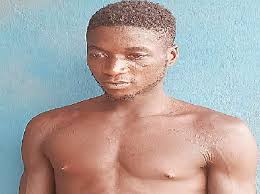 Men of the Ogun State Police Command have arrested a 27-year man, Sikiru Ibrahim, after he had allegedly killed his father.

The incident was said to have happened at Onipanu area of the state.

The suspects was accused of attacking his father with a cutlass and killed him for allegedly disturbing his sleep.

The father, Mumuni Ibrahim, a night guard, reportedly returned from his work on early Wednesday morning and annoyed his son for waking him from deep sleep.

The suspect was said to have been annoyed by his late father’s probe of why he was still in bed at that hour.

The suspect believed to be to be a cult leader, reportedly attacked the father and matchetted him but died the following day in the hospital from injuries he sustained during the incident.

Meanwhile, the spokesman for the Ogun State Police Command, Abimbola Oyeyemi, in a statement, said the suspect was arrested following a complaint lodged at the Onipanu Divisional Headquarters by his father’s neighbor, Abiodun Sunday.

He said: “The neighbour reported that the deceased, Mumuni Ibrahim, a guard, returned home and met his son who was still sleeping, and when he asked him why he was still sleeping at that time of the day, the suspect got annoyed and brought out a cutlass with which he attacked the victim.

“Upon the report, the DPO Onipanu Division, CSP Bamidele Job quickly mobilised his men and moved to the scene where the suspect was arrested and the victim rushed to a general hospital for treatment. The suspect, who is strongly suspected to be a cultist, has no reasonable explanation for his action when interrogated.”

However, he said the State Commissioner of Police, Lanre Bankole, had ordered the immediate transfer of the suspect to the homicide section of the State Criminal Investigation and Intelligence Department for further investigation and prosecution.