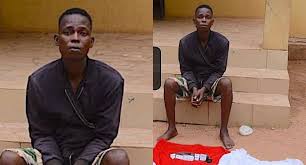 A 27-year old man, Adeniyi Adeleke, accused of raping a 10-year old girl in Idoani in Ose Local Government Area of the state is in police net.

Adeleke was arrested by the police raping his neighbor’s daughter, whom he allegedly lured into his room and forcefully defiled.

The victim was said to have suffered so much pains and reported to her mother, who reportedly rushed her to the hospital where it was sconformed that the little girl had been violated.

It was gathered that the victim, having gone through pains reported the matter to her mother who rushed her to the hospital where it was confirmed that she had been raped.

The suspect was arrested after the mother had reported the matter to the police.

Confirming the incident, the spokesperson for the Ondo State Police Command, Mrs. Funmilayo Odunlami, in a statement, disclosed that the suspect had confessed to the crime.

She said the suspect further confessed that she wanted to use the little girl for money ritual.

The police spokesperson said a ring and red clothes were recovered form the suspects’s his room.

The statement read: “On 16th April 2022, at about 2.40 pm, one Bosede Alo, of Idoani reported at the Idoani Division, that sometimes in the month of March 2022, at about 3 pm, one Adeniyi Adeleke, 27 years, called her ten-year-old daughter to his room and forcefully have carnal knowledge of her.

“On receipt of the information, detectives swung into action and arrested the suspect, upon interrogation he confessed to having committed the crime that he wanted to use her for money ritual. Items recovered are a ring and pieces of red clothes. He will soon be charged to court.”