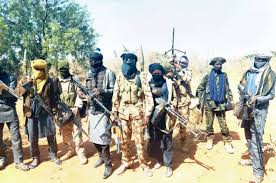 The victims were kidnapped by the bandits on March 21, 2022 and had demanded N20 million ransom for each of the captives.

‎The bandits on Monday night reportedly killed three of the victims, when their relations failed to pay the ransom.

The bandits are threatening to kill more of the victims by 12 noon on Tuesday if their demands are not met.

‎Confirming the killing of three kidnapped victims, the Chief of Ungwan Bulus, Gideon Haruna Goni, said the bandits called the community to inform that they should pick the corpses around Dutse Community along the Kaduna-Abuja highway.

According to him, the corpses had been retrieved.

He said the bandits had threatened that if the family failed to pay N20 million each for other captives before 12pm on Tuesday (April 19, 2022), the remaining victims would be killed.

He said: “We came together as a community, raised some amount and they called us and told us to pick corpses of victims from Dutse. They threatened to kill more, especially women, if their demands are not met. 26 were abducted, one was released, three were killed.

“The only person released by the bandits was considered on health grounds. So, we are appealing to the kidnappers not to kill any of the victims and we are also pleading with the state and federal government to come to our aid.”