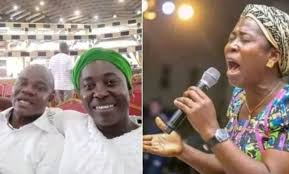 Mr. Peter Nwachukwu, husband of the late popular Nigerian gospel singer, Osinachi Nwachukwu, has been arrested by the police.

A police source not authorized to speak on the matter, disclosed that Osinachi ‘s husband was arrested in Sunday for alleged assault of his wife before she eventually died.

Osinachi ‘s family was said to have reported the case to the police after suspecting a fowl play in circumstances leading to her death.

Osinachi’s husband was alleged to have kicked his late wife, who was lead singer at the Dunamis International Church, in the chest.

The deceased ‘s elder sister, who also confirmed that the husband kicked Osinachi in the chest, said the abuse led to her being taken to the hospital.