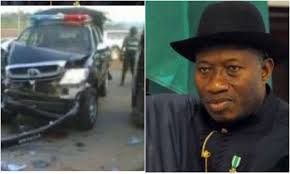 However, his two security details, Inspectors Ibrahim Abazi and Yakubu Toma, died in the crash that occured on Wednesday night.

Jonathan was said to be returning to his Abuja home after arriving the Nnamdi Azikiwe International Airport from a trip.

The former president was not affected by the crash and was hale and hearty, according his Special Adviser on Media and Publicity, Ikechukwu Eze.

Condoling the families of the deceased officers, he said two other officers involved in the accident are receiving treatment at an undisclosed hospital in Abuja.