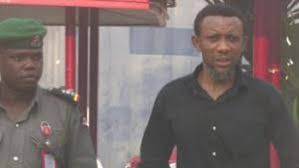 An anti-graft agency, the Economic and Financial Crimes Commission (EFCC), has arraigned a man, Dominic Chukwuma Ifekwu, before the Special Offences Court, sitting in Ikeja, Lagos for allegedly swindling a German woman, Imelda Dorflinger, of €211,000.

The defendant was accused of duping the unsuspecting foreigner after telling her a false story about his gold inheritance from his father and needing money to pay taxes.

The defendant was arraigned on Monday 11 April, 2022 by the EFCC before Justice S.O. Solebo.

Ifekwu, who used the name, John Alfred, was said to have met the foreign woman on Facebook and built a relationship with her before he eventually duped her

The defendant allegedly posed as a Crown Prince of Ghana, with deposits in Bank of Africa in Ghana.

And since Ghana is known for gold deposit, the German lady reportedly fell for his fake story.

One of the counts reads: “Ifekwu Chukwuma Dominic, aka John Alfred, and Okechukwu, aka Connie Miller (at large), between 2014 and 2017, within the jurisdiction of this Honourable Court, with intent to defraud obtained the aggregate sum of 211,000 Euros from Imelda Dorflinger under the false representation that you Ifekwe Chukwuma Dominic had inherited gold from your father and needed the said money to pay taxes in order to enable you to have access to the gold, a representation you knew to be false.”

Another count reads: “Ifekwu Chukwuma Dominic (aka John Alfred),on or about 22nd June 2016 within the jurisdiction of this Honourable Court, and with intent to defraud, had in your possession document titled “Cashier Cheque” , where you falsely represented to Imelda Dorflinger that you have been issued a cheque valued at $590,000.00 and which document you knew contained false information.”

Ifekwu pleaded “not guilty” to the charge prompting the commencement of his trial.

During the court proceeding, a witness, Mma Adamu Alhaji, an operative of the EFCC, told the Court that the EFCC received a petition against the defendant sometime in September 2021 in which the defendant was accused to have defrauded his victim, Imelda Dorflinger, a German national, by posing as one John Alfred, with whom she developed an online friendship.

One Connie Miller, who was actually one Okechukwu currently at large, had linked Dorflinger to Alfred, who is actually Ifekwu.

The prosecutiin stated: “When they became friends, the defendant started coming up with request for money. In July 2015, they had an agreement to meet in Lome, Togo, and they eventually met there.

“Upon their meeting, the defendant presented some documents to her, including gold export certificate, financial deposits in Bank of Africa, Ghana, and some other documents.

“The defendant deceived his victim into believing that he was ‘a Crown Prince’, in Ghana, who had a Gold inheritance that he needed money to secure, which he inherited from his father worth 250 kilogrammes.

“The defendant had told his victim that the gold was in the bank, and that he needed money to pay tax and other things to receive it.

“Based on the presentation of the documents, she believed the defendant and started sending him money through Moneygram.

“In December 2015, they still met again in Togo, and the defendant still promised her that after he finishes clearing the gold, he would pay her back. She kept on sending money until sometime in 2017.

“But as there was no regarding the clearing of the gold, then, she met a Nigerian and made an enquiry.”

The witness explained that following her conversation with the Nigerian, it dawned on her that she had been defrauded by the defendant, and that Dominic was no Ghanaian Crown Prince, but a Nigerian.

He said: “From there, she discovered that she had been defrauded, and stopped all communications with him.”

However, after a long while, the witness said the defendant again tried to reconnect with his victim and sent her an email again to greet her.

He said: “She responded, and the defendant again started bringing up the issue of gold, that the gold is still there, and that he needed more money to clear it.

“From there, she played along and made plans to get him arrested. She agreed to meet him again, with a promise to bring more cash for him.

“Subsequently, the defendant was arrested and handed over to the EFCC for further investigation.”

He told the Court that upon interrogation, the defendant admitted the allegations against him in his statement volunteered to the EFCC.

“The defendant admitted that the allegations are nothing but the truth,” he said.

Thereafter, the prosecution sought to tender the said petition to the EFCC and the statements of the defendant made to the EFCC.

Justice Solebo, thereafter, admitted the petition in evidence as Exhibit A, and adjourned till April 12, 2022 for trial-within-trial to prove the voluntariness or otherwise of the statements being sought to be tendered.