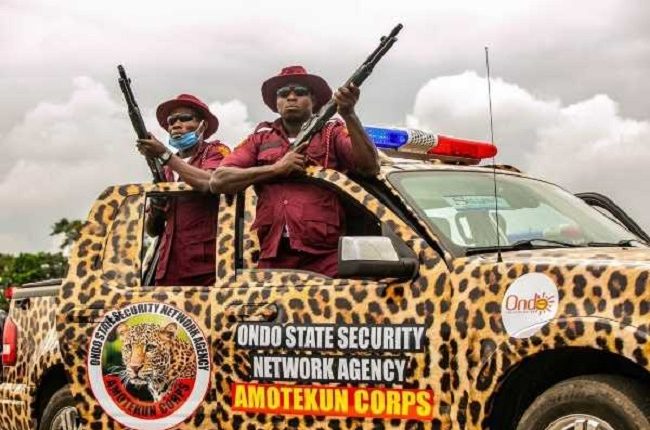 The Ondo State Security Network Agency otherwise known as Amotekun Corps have arrested a middle-aged man, Igbekele Abiodun, after his gang kidnapped four worshippers on Wednesday during a vigil inside an Akure church.

Speaking with newsmen, the state Commander of the Amotekun Corps, Adetunji Adeleye, disclosed that the suspects and members of his gang stormed the church at around 11.00 pm on Wednesday during a vigil session and abducted four female worshippers in the church.

Adeleye, who gave the location of the church as Edo Lodge area of Akure, said: ”At about 11.00pm, we received a distressed call that some hoodlums kidnapped the worshippers who were in their church doing their service. It was one of them (Igbekele Abiodun) that first entered the church and asked the worshippers to stand up before the other members of the gang entered. They abducted four female members of the church and molested them.

“Our men immediately swung into action and we were able to rescue the victims and arrested one of the suspects (Igbekele Abiodun). Our men are still on the trail of the remaining suspects. We have brought the victims to our office and we have given them medical treatment.”

Narrating how the victims were rescued by his men inside a forest in Ado Ekiti, Ekiti State around 1.30 am on Thursday, Adeleye said the arrested suspect dressed like a woman to evade arrest.

One of the rescued victims, Mrs. Eunice Taiwo, said the bandits collected their money and phones as soon as they attacked the church.