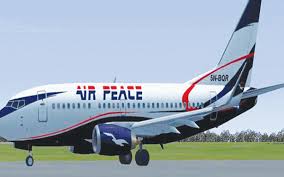 150 passengers on board an Air Peace plane from Asaba to Abuja have narrowly escaped death following a stormy weather preventing them from landing.

The flight hd to be diverted from the Nnamdi Azikiwe international Airport, Abuja at 6.00pm on Wednesday to Lagos.

Again at the Lagos airport, it was gathered that the storm started again.

One of the passengers, Ngige Nwachukwu, said they (passengers) and crew came face to face with death.

In his words: ”We prayed, sang, cried, moaned, thinking it was over. One young man around me cried more than a baby. The girlfriend was stronger, consoling him. Jehovah simply warned us to go and sin no more.

“Instead of the 45 minutes estimated arrival time, the plane eventually landed at the Nnamdi Azikiwe international Airport Abuja at 11:47pm.

“Over 150 of us on Air Peace from Asaba escaped death after our plane hovering for 30 mins in the FCT, almost gave in to heavy storm on attempting to land.

“With tyres already out , only the Almighty knows how the pilot pulled back and took the flight on an ascent, on top speed. It was almost 30 mins of face to face with death.

“The plane was hit left to right by the storm, violently ascending and descending. We all gave up until the pilot emerged to a announce after the plane got a little bit stable, we were headed to Lagos for safety.

”In Lagos, another gale of storm saw the plane hovering for another 15 mins before it eventually landed.

”After re-fueling, the cabin crew announced flight back to Abuja. Most people rejected it and opted out of the plane. Out of indecision, when I made up my mind to disembark, the pilot insisted the doors were shot and won’t be opened again.

“We took another risk, flying back to Abuja. Of course, the pilot, a Spanish earlier announced that whether in Abuja had become clement. God decided to give us another opportunity to live. May His name be blessed forever.”