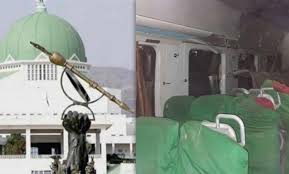 The National Assembly has called for the Chinese Government’s assistance in rescuing remaining 62 Kaduna-Abuja train passengers kidnapped by bandits on March 28, 2022.

He said the call for Chinese government’s help is not a loss of confidence in the Nigeria’s effort in rescuing the victims, maintaining that Nigeria could not be compared with China when in deployment of technology.

He said: “When we are talking about human lives in danger. It’s been 47 days, and these people are still captive. You cannot compare the technology at the disposal of the Chinese with Nigeria. Even if they won’t show us, let them help us from their base in Beijing.

“It’s embarrassing that 47 days after some passengers were kidnapped from the Abuja-Kaduna train, they are yet to be rescued.

“Today makes it exactly 47 days that some Nigerians were abducted from the Abuja-Kaduna passenger train, yet nothing has been done to rescue them.

“Yesterday, some of the families of the abducted passengers met with the Kaduna State Governor, Nasir El-Rufai, and the accusation was that we the lawmakers are not doing anything about rescuing their relatives in captivity.

“What effort is the Chinese Government putting in place to assist the Nigerian Government in rescuing these people?

The Chinese Government makes money from the many rail projects that are being handled by the China Civil Engineering Construction Company (CCECC) here in Nigeria, so asking them to help us is not out of place.

“Nigerians are no longer ready to listen to the number of passengers that have been carried by the trains since they were commissioned. Nigerians are not interested in what has been put in the various stations by the CCECC. What we want to hear now is the effort being put into rescuing those people in captivity.

“If a Chinese national was among those people abducted, we know that the Chinese Government would have come to rescue him.

“I remember when an American was kidnapped, the Americans came and took him away from where he was held captive. We know that with the level of technology that the Chinese have, even without leaving Beijing, they can help us track where these people are, or even give us enough intelligence that would aid their rescue.

“Imagine one of the abducted passengers giving birth while in captivity. This is unfair to Nigerians. When the Chinese came to help us build the trains, we were happy because it changed the way Nigerians use rail transport. However, the March 28 terrorists attack the Abuja-Kaduna passenger train has succeeded in turning what gave us joy initially to sorrow.”

The Deputy Managing Director of CCECC, Xia Lijun, a Chinese firm, who also spoke at the event, asked the Joint National  Assembly Committee to look into power supply and access road issues affecting most of the train stations.

According to him: “Most of our train stations don’t have good access roads. Please help us look into this issue. Again, the issue of power supply is a problem. Without us getting connected to the power supply from the national grid, getting signalling and communication of the trains up and running is difficult.”

Also, the Managing Director of the Nigerian Railway Corporation (NRC), Engr. Fidet Okhiria, said the corporation is increasing use of technology in its operations to restore confidence in the trains.

He said: “We are deploying technology and it is only then when we are sure that we would open up the line.

“But what I want to say is that the Nigerian Railway Corporation is doing everything possible within its power and with other sister agencies to ensure the security of our passengers on board.

“In terms of operation, you can imagine Abuja-Kaduna service, we have not resumed that but in terms of other lines, customers and passengers are getting the confidence back again and the number has started to go up again.”