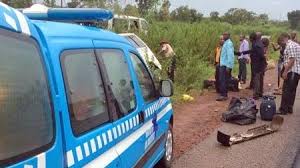 No fewer than seven persons died and twenty one others critically injured in a ghastly motor accident in the early Sunday morning along Ogbomoso-Ilorin expressway.

Two women were among the travellers that lost their lives to the accident, which occurred around 3:00 am.

The lone accident was said to have been caused by overloading.

The Kwara State Sector Commander of Federal Road Safety Corps (FRSC), Jonathan Owoade, who confirmed the accident to journalists, said the injured persons had been taken to the General Hospital and Garin Alimi Hospital in Ilorin, adding that the corpses were deposited in the hospital morgue.

He said: “The accident involves an 18-seater bus and should have been carrying 14 passengers at most because of Covid-19 restrictions. But we have 18 persons on board including children. This is why we have consistently warned about overloading and over-speeding.”