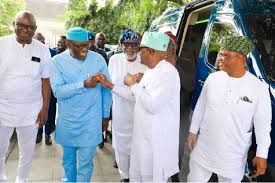 Also, in attendance at the meeting was Senator Olaka Nwogu.

However, neither Wike and Fayose nor the governors explained the reasons for the meeting as they declined to respond to newsmen’s questions.

Political analysts believe the meeting may be connected with crisis in the People’s Democratic Party (PDP) aftermaths of its presidential primary poll, where Wike was not favoured and not picked as running mate to the party’s presidential candidate, Alhaji Atiku Abubakar.

The APC governors might want to woo Fayose and the Rivers governor, who was said to have been wronged by Atiku, to the APC and get the votes of the Southsouth for the party at the 2023 presidential election.

Daughter, father in police net for kidnapping toddlers, girl says she collects N30,000 on each child