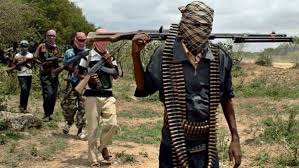 No fewer than twenty four residents of some communities in three council areas of Benue State have been killed by unidentified herdsmen.

A traditional ruler, Zaki Unongo Shaayange, was said to be among those shot dead on Monday night by the herdsmen, who were said to be heavily armed with assault rifles, matchets and other dangerous weapons

The herders reportedly invaded the communities in Logo, Tarka and Guma Local Government areas of the state separate attacks when residents were almost going to bed

It was learnt that many residents were seriously injured during the deadly attacks.

According to a community leader, Chief Joseph Anawa, the armed herdsmen were about six.

He said they blocked the Anyiin-Tse Kile road in Ukemberagya Ward of Gaambetiev Logo Council around 7:15p.m during their attack.

Narrating the incident to newsmen, he said: “They shot and killed the traditional ruler, Zaki Unongo Shaayange at Ikyaan village, matcheted many who are now in critical condition at the NKST Hospital Anyiin.

“One of the victims of the attack, Mr. Aondoakura Kile also disclosed that the Fulani terrorists made away with some Bajaj motorcycles of their victims.”

An eye witness, who is also a resident, disclosed that the herdsmen invaded the community from the neighbouring Nasarawa State.

The resident, who pleaded anonymity, further disclosed that the herdsmen were shooting sporadically and chasing their victims out of their homes during the attack, saying: “They shot at the people as they fled and anyone they caught up with was not spared. Nine persons were killed and many others sustained injuries.

“As we speak women and children are fleeing their homes in their numbers in search of safe areas in neighboring communities to hide themselves.”

The Guma Local Government Council Chairman, Mr. Caleb Aba, who confirmed the incident, told the newsmen the attack was unprovoked.

He said: “These days, herdsmen don’t have to be provoked before they attack and kill because the agenda is to chase us away from our ancestral homes and occupy our land.”

In another attack, the armed herdsmen were said to have invaded Tiortyu, a community less than 18 kilometers from Makurdi town on Makurdi-Gboko road in Tarka council, where 15 persons, including women, were eitherreportedly hacked or shot dead.

Happening on same Monday night, angry youths took to the street,NIN a protest, laying corpses on road and blocking the busy Makurdi-Gboko road.

The youths for several hours stopped all vehicular movements on that axis of the state.

She said she was at the scene of one of the attacks with the Police Commissioner and would later brief journalists on the incident.